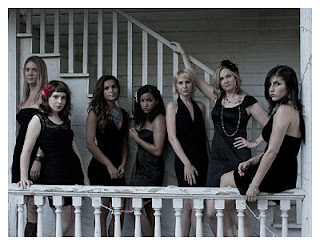 Charlie Stites is a big guy with a big heart whose most recent stage outings have been as braggarts and sexual boasters. He counters that image somewhat with his intent to right the acting balance between the sexes by staging this drama by actress Carolyn Kava, done to respectful New York reviews in the mid-1980s.

Stites writes in the program that he was struck "by the dearth of interesting parts available for [women]," making "the ladies of Austin theatre. . . an underused resource."

Without judging that declaration, I can confirm that he and his Paladin Theatre did recruit a houseful of sensitive and impressive female actors for Early Girl. Some I had seen before -- Wendy Zavaleta in striking roles in musical theatre, Molly Karrasch at the Austin Playhouse in several roles, including a superb turn as Rita in Educating Rita, and Karen Alvarado in well defined, deft portrayals with Teatro Vivo. Lindsley Howard is new to me but will become much more familiar to our Austin audiences next month when she plays Miranda, the romantic lead in Austin Shakespeare's The Tempest. Keylee Paige Koop, Ashley Rae Spillers (with that striking red flower in her hair) and Rose Fredson also absorbed their characters and interpreted them decisively. Maybe Charlie has a point; with wealth of femininity such as this, we may be missing something on the feminine side in Austin theatre.