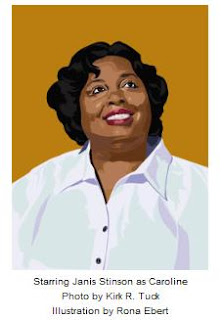 Zack Theatre staff probably know that they have a marketing problem with this production, which runs pretty fiercely against the grain of the happy rock ‘n’ roll that thrums through many productions at the Kleberg stage.
The print ad appearing in this morning’s XL supplement to the Austin Statesman is just going to make things worse.
Tuck and Ebert’s handsome depiction of Janis Stinson in the title role of Caroline (right) implies an uplifting experience (eyes to heaven, smile of hope) and the teaser above that image reads Filled with Stirring Music that Pulses with the Beat of the 1960s! Live! Now on Stage!

Well, not exactly. The only beat of the 1960s is on the sound system before the show and during the intermission.

Three rock ‘n’ roll spirits collectively known as “radio” are indeed evocations of the Supremes or Martha Reeve and the Vandellas, but they aren’t doing R&B for us.

Caroline or Change is not musical comedy. Athough most of the dialogue is sung, its closest template might be the “Singspiel,” a form popular in Germany in the 19th century. Singspiele, mostly comic, were evanescent. Those that remain in the canon are tragedies (Fidelio, Der Freischütz and, perhaps, Die Zauberflöte). Wikipedia comments that Singspiele “frequently include elements of magic, fantastical creatures, and comically exaggerated characterizations of good and evil.”
Roger that. In the fantastical category we have actors playing the spirits of the washing machine (a purple diva), the dryer (a portly devil with a Little Richard ‘do), the radio (those Supremes), and the moon (serenissima). They’re vividly costumed apparitions tied to popular imagination both black and white, and they prompt our smiles and anticipation.

Caroline is a maid in Lake Charles, Louisiana, a stolid, diligent, unsmiling woman afflicted with poverty and responsibilities. Janis Stinson in this role has tremendous presence and a huge voice, but she does not smile once. Except at the curtain call.
She has every reason in the world to be dour. Her employers the Gellmans are a dysfunctional, disconnected family of losers so wrapped in their own preoccupations that they are on another planet.

The father of the family (Adam Smith), a musician, is still so distracted with grief at the death to cancer of his wife that he can do nothing but practice his clarinet throughout the day. He was sentient long enough sometime in the past to marry his wife’s best friend Rose (Meredith McCall). Son Noah (Matthew Moore) rejects his stepmother, clings to his cuddly toy, and worships Caroline the maid, the only sane presence in his world.
Grandparents Gellman (Robert Faires and Linda Nenno) appear as a chorus. Stepmom’s dad Mr. Stopnick (Ben Prager) joins to deliver a socialist harrangue and a lecture to the boy on money as theft while presenting him with his Hanukah gelt. 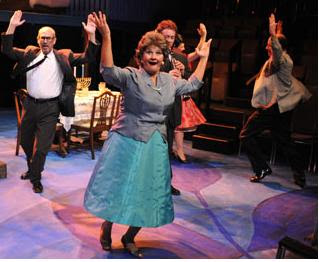 The family’s Hanukah dinner and celebration, complete with a frantic horah fueled by dad’s clarinet, are a grotesque caricature of Jewish life.

The theme of the play is “change” (the word that appears as the alternate title to the piece). Not “THE change,” which would suggest an evolution, a reassessment, or an awakening, appropriate to the mid-1960s. No, it’s “change” as in pennies, nickles, dimes and quarters.

Neurotic stepmom finds son Noah completely irresponsible with his pocket change. Noah is always leaving money in his pockets when he tosses them in the laundry. So after due warning and dire admonition, stepmom takes the drastic step of telling Noah and the maid that Carolline has the right to keep any money that she finds in pockets when doing the daily laundry.

Noah seizes the opportunity secretly to finance Caroline and her family. Caroline struggles with the temptation but begins taking the money. Stepmom doesn’t dream of giving the maid a raise, of course, and dad cannot deal with much of anything.
And guess what happens with the twenty-dollar bill that Noah receives at Hanukah?
We get some exposition of Caroline’s background at the opening of the second act – 22 years of maid’s work, divorce from an abusive, disappeared husband and the struggle to maintain her family of three children on a derisory wage.

Her oldest, Emmie (Shavana Calder), is a young teen indifferent to the assassination of Kennedy (“some white guy”), entranced by pop music, and involved in the prank of “kidnapping” the statue from the monument to Confederate war heroes. Calder is confident, talented and a pleasure to watch. She, Stinson and Sarah Yvonne Jones as Caroline’s friend Dotty are the only adult characters of believable depth in the piece.
Stage design and lighting are strong points, as you can see from some of the images currently posted at Zach’s website. Here's one of the core set, staggered levels with the picket-fence motif to remind us of the small town setting and the august Moon over all. 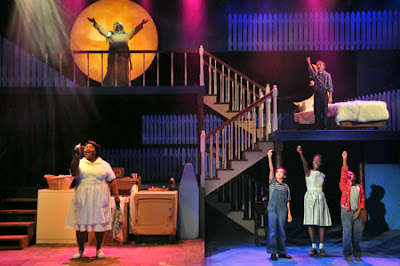 Here’s the opening scene, with Caroline doing laundry, Jones as the spirit of the new electric washing machine, and the radio three. 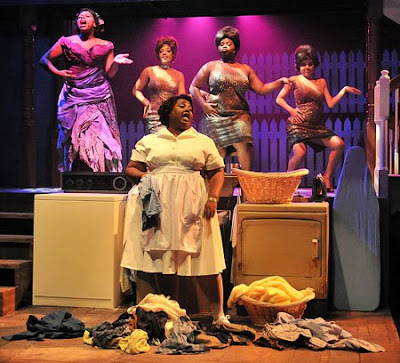 And then Caroline’s long wait after work at the bus stop, with Dotty, on November 22, 1963, when the author would have us believe that news traveled so slow in Louisiana that they knew nothing of the Kennedy assassination, ten hours later. The news is broken by the bus driver (Frank Viveros). 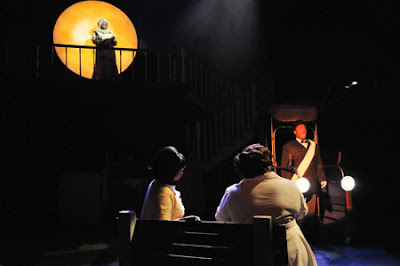 I hesitate to offer an opinion on the music. Like your typical Austin theatregoer, I don’t have much background in opera or contemporary formal musical staging. I’m willing to welcome the idiom of the play, even though I couldn’t identify the musical tradition and didn’t come out humming any of the songs.
It was really loud, though. I was sitting in the front row in a fairly compact theatre, ten feet away from performers who were mic’d up and amplified as if they were singing to a crowd stretching all the way to Lamar Boulevard. One got used to it in a stunned sort of way; I suppose that may be standard for the musical theatre here.
So let’s classify this one as an artist’s experiment. Tony Kushner, author of the book and lyrics, acknowledges that he was only one year older than the son, Noah, when his musician parents took him from Manhattan to live in Lake Charles. This piece is probably about Tony Kushner trying to deal with the cultural divide he found in Louisiana, especially the African-American society descended from slaves and still routinely mistreated.

It is curious that not a single white Southerner appears in the play.
In creating this fictionalized world Tony Kushner appears to have been transmuting his own guilts and misgivings into art. There is much here to praise, particularly the talent of the singers and the designers of the Zach Theatre production. But try as I might, I’m not happy about witnessing his catharsis.

Even so, congratulations to the Zach for not settling into the groove, so to speak, of easy happy rock 'n' roll musicals. Theatre goers can appreciate the chance to look at something knottier from time to time. This show deserves your serious consideration.
Review by Warren & Derrick, September 18
Review by Angela Henson, Soulciti.com, September 25
Review by Aboubacar N'Diaye in the Daily Texan on-line, September 25
Review by Jeanne Claire van Ryzin in the Statesman, September 30
Rave review by Hannah Kenah in Austin Chronicle, October 17: "Zach Theatre's fine staging should be required viewing at this historic moment"
34 production photos of Caroline or Change by Kirk R. Tuck
Cast portraits
Video: Tony Kushner interview on Charlie Rose show
Video of scene from Caroline or Change at 58th Tony awards, June 6, 2004
NYT review by Ben Brantley of the original Broadway production, May, 2004

Review of the original production at Theatre Scene.com
NYT interview by Robin Finn with composer Jeanine Tesori, December 16, 2003
90-minute American Theatre Wing program on Working in the Theatre, episode 322, April 2004, interviewing Tony Kushner, Jeanine Tesori, Tonya Pinkins (Caroline) and others on creation of the show
Posted by Michael at 11:06 AM