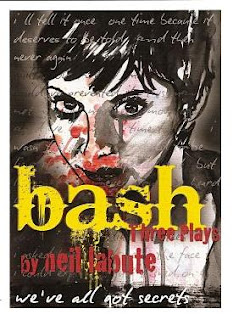 The Vestige Group is a small band of purists in an unpure world. They believe that theatre, up close and personal, has something to teach about the human condition. Something that you won't get from video or even from books. They like extremes. Celebration, as in the goofily outrageous Gorilla Man or in Lonestar, A Popcorn Throwing Musical or examinations of the lost and extreme, as in Marisol, in Touch and in this grim trio of plays by Neil LaBute.

When presented off-Broadway in 2000, LaBute's Bash carried the title Bash, Latter-Day Plays, a transparent reference to the Mormon world of Utah and Brigham Young University, where he had studied and taught theatre for years. That was a cheap shot, I think, perhaps even a New York marketing ploy, for LaBute has drawn characters whose twisted lives could play out anywhere. He stresses his intent of universaility that with two of the titles: "Iphigenia in Orem" (Utah) and "Medea Redux." The middle piece, "A Gaggle of Saints," describes a high spirited overnight trip to New York, and none of the happenings have much to do with saints, sainthood or the Church of the Latter Day Saints (LDS).

He sets these events pretty solidly in the early 1980's, with passing references to flashbulbs, to the BeeGees and to daily viewing of Hogan's Heroes. That is, indeed, the period when he attended BYU as an undergraduate and accepted the Mormon faith. Bash put paid to that, however, for after the show played in New York, the LDS Church formally excluded him from fellowship, presumably because the play's portrait of dark, murderous individuals offended the elders of the church.