Upcoming: Over The River and Through the Woods by Joe DiPietro, City Theatre, November 29 - December 23


Over the River and Through the Woods


Come home for the holidays and celebrate family…faith…food! 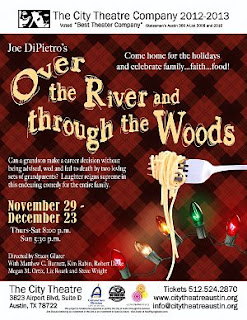 The City Theatre Company is pleased to announce a special holiday theatre celebration with Joe DiPietro's hilarious family comedy Over the River and Through the Woods at the City Theatre on November 29 – December 23. This heartwarming show illustrates the unquestionable love between family members old and young, and how traditions, faith and loyalty not only survive, but transform throughout all generations.

The play revolves around Nick, a 32-year-old single Italian-American man who dutifully has dinner with his grandparents every Sunday. At an unscheduled visit, Nick announces that he is leaving New Jersey to take a job in Seattle. To his grandparents, whom Nick calls “the loudest people I’ve ever met,” they have already lost Nick's parents to distant cities and his desire to move makes no sense. The grandparents take his announcement as a declaration of war and pull out all the stops, including match-making, outrageous schemes and wild dinner parties to keep him home. The antics that follow are hilarious and touching and all add to a wonderful night of theatre.


Loaded with laughs, every step of the way.” – Star-Ledger

“Over The River…a sweet, charming play that makes us feel good ..." – ChicagoCritic.com


Joe DiPietro is a Manhattan-based playwright known for many productions including the hit musical comedy I Love You, You're Perfect, Now Change, All Shook Up and Babes in Arms, among other productions. He is the recipient of the William Inge American Theatre Award and the O'Neill National Playwright's Conference MacArthur Award for comic writing. The production is directed by Stacey Glazer who directed City Theatre’s How the Other Have Loves, The Crucible and the award-nominated Rabbit Hole. The cast features Matthew C. Burnett (Nick), Kim Rubin (Aida), Robert Deike (Nunzio), Liz Roark (Emma), Steve Wright (Frank), and Megan M. Ortiz (Caitlin).

The City Theatre Company is an Austin-based not for profit arts organization and is sponsored in part by the Austin Creative Alliance and the Austin Cultural Arts Division. Founded in 2006, the company has been recognized by the Austin Critics Table Awards, the B. Iden Payne Awards and was twice voted “Best Theatre Company” by Austin- American Statesman’s Austin 360. CTC is dedicated in providing quality theatre experience and entertainment for Austin artists and its community.