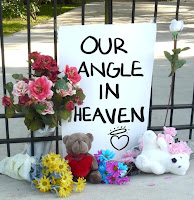 'Our Angle in Heaven' premieres at FronteraFest Long Fringe

New solo show tackles themes of celebrity obsession, media manipulation and public versus private mourning. Princess Diana’s death is the catalyst for lives both interrupted and dramatically changed.
To the outside world, we were a nation in mourning, a country united in its grief. Sensational media headlines obscured the reality of ordinary Brits faced with Princess Diana’s death. Some reacted with anger, others ambivalence and even apathy.
“Our Angle in Heaven” portrays 8 people in the week following Diana’s death. In a series of monologues, by turns painfully honest and darkly funny, the lives of this cross-section of Brits are interrupted by the news. Among them, an entrepreneur responds to accusations of profiteering. A teenager struggles with gender identity. A Muslim woman refuses to fit the media stereotype. A conspiracy theorist makes startling and traitorous revelations about the Royal Family.

Writer and performer Maggie Gallant also portrays herself and her battle with public versus private mourning amidst the frenzy.
“Britain’s streets were not stained with our tears,” says Gallant. “The media’s reaction ignored the fact that for some it was just an unexpected blip in their busy lives.”
The play gives an insight into the British psyche of September 1997, but also draws on many themes that are just as relevant today, from anti-Muslim bigotry to class divisions, celebrity obsession, and media exploitation.
Maggie Gallant, a British-born writer and actor living in Austin, previously performed an excerpt of the play, titled ‘That Diana Look’ at the FronteraFest Short Fringe 2008.
All 4 performances will be at the Salvage Vanguard Theatre, 2803 Manor Road, Austin.
Show runs approx 60 minutes.
Saturday 24 January @ 6:00pm
Sunday 25 January @ 12:00pm
Wednesday 28 January @ 9:15pm
Sunday 1 February @ 4:00pm
Reservations: 512 479-7529 or www.hydeparktheatre.org
For more information: www.ourangleinheaven.com