(performing in 2013 at Highland Malll -- click for instructions and map) 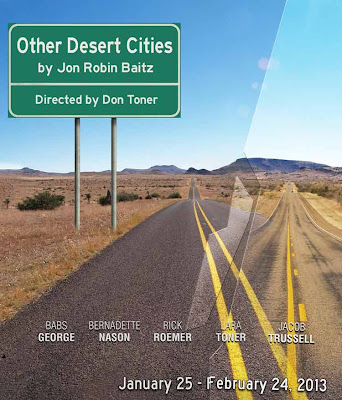 January 25 – February 24, 2013
Thursdays–Saturdays at 8 p.m. and Sundays at 5 p.m.
Austin Playhouse at Highland Mall, 6001 Airport Blvd., Austin, TX 78752
WEB: www.austinplayhouse.com
TICKETS: $28 Thursday/Friday, $30 Saturday/Sunday
$37 Opening Night with champagne reception: Friday, January 25
Box office 512.476.0084 or online at: www.austinplayhouse.com
DISCOUNTS: All student tickets are half-price.
Austin Playhouse is proud to bring Austin audiences Baitz’ powerful family drama. In the award-winning Other Desert Cities, Baitz brings us an emotionally charged play about a family coming to terms with long-held secrets. “Baitz’ latest familial drama manages to be funny, cutting, and illuminating. Secrets, lies, and betrayals play out against a backdrop of Californian affluence and restraint. This is rich dysfunction – zingers are delivered with a whiskey chaser.” –The Huffington Post

Brooke Wyeth (Lara Toner) returns home to Palm Springs after a six-year absence and a mental breakdown to celebrate Christmas with her parents (Babs George and Rick Roemer), her brother (Jacob Trussell), and her aunt (Bernadette Nason). Brooke announces that she is about to publish a memoir dredging up a pivotal and tragic event in the family's history—a wound they don't want reopened. In effect, she draws a line in the sand and dares them all to cross it.

The play premiered Off-Broadway in January 2011 to critical acclaim and transferred to Broadway in November 2011, marking the Broadway debut of a Baitz play. The play was named Outstanding New Off-Broadway Play by the Outer Critics Circle and won the Drama Desk Award for Outstanding Play. It was a finalist for the 2012 Pulitzer Prize for Drama. (Click to view Wikipedia article)

Jon Robin Baitz’s plays include My Beautiful Goddamn City, Ten Unknowns, The Paris Letter, Mizlansky/Zilinsky or Schmucks, A Fair Country, The Substance of Fire, and an adaptation of Henrik Ibsen’s Hedda Gabler. His television credits include The West Wing, Alias, and Brothers and Sisters, which he created.
Production Team Don Toner is the director. Buffy Manners is the costume designer. Don Day is the lighting designer. Set Design is by Don Toner and Patrick Crowley.
Critical Praise "The most richly enjoyable new play for grown-ups that New York has known in many seasons…In his most fully realized play to date, Mr. Baitz makes sure our sympathies keep shifting among the members of the wounded family portrayed here. Every one of them emerges as selfish, loving, cruel, compassionate, irritating, charming and just possibly heroic…leaves you feeling both moved and gratifyingly sated." —NY Times. "Astutely drawn…juicy and surprising." —NY Daily News. "Spending time with these messed-up, complicated people is a genuine pleasure." —NY Post. "Power, passion, and superbly crafted palaver stippled with blowdarts of wit—this is what Baitz does best." —New York Magazine.
Austin Playhouse at Highland Mall
Austin Playhouse is currently performing at Highland Mall. The mall’s South entrance is the most convenient to Austin Playhouse. Take the escalator down to the lower level and turn right. Austin Playhouse is on your right, across from the Express.