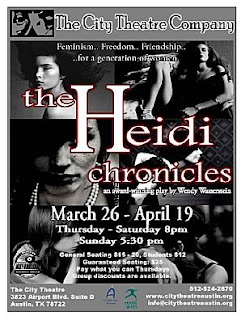 Wendy Wasserstein, playwright of The Heidi Chronicles, died in 2005, cut down in full artistic activity by lymphoma. Her play Third, which premiered that year, was performed in Austin last September by the Paradox Players. The City Theatre has just opened The Heidi Chronicles for a four-week run, featuring a talented young cast, clever staging and some still unanswered big questions.

One of five children of a wealthy Jewish family in Brooklyn, Wasserstein graduated from Mount Holyoke, then obtained master's degrees from City College of New York in 1971 and from the Yale School of Drama in 1976. Her graduate thesis project at Yale was produced off-Broadway in 1977, featuring Glenn Close, and then on PBS with Meryl Streep. Wasserstein wrote three more plays and then in 1989 The Heidi Chronicles won the Drama Desk award, the New York Critics' award for best new play, a Tony Award and the Pulitzer Prize for Drama.

The juries for those awards must have recognized this play for its comic, yet earnest take on the emotional plight of highly educated American women. Female thirty-somethings faced contradictions and were assailed by cognitive dissonance when choosing between aspirations for careers and the allure of the safe, mostly suburban world of motherhood. If intelligent women were -- or should be -- the equals of men, why did so many of them decline to compete? And how could capable, successful female professionals establish the comfort, intimacy and family ties that seemed to accrue naturally to mothers and housewives in their warm and fuzzy little worlds?

In her portrayal of Heidi Holland from high school through her young middle age as a respected university professor, Wasserstein deliberately does not answer that question.