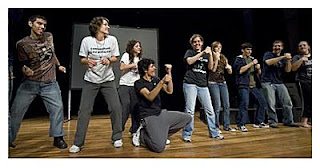 From the Austin American Statesman, March 30:

UPDATE: Feature article by Kira Matica, with photos, on Austin.com

During the number "You're the One That I Want," Kalie Kubes and Skye Alanis are flirtatiously dancing with eyes just for each other, as well they should, because they are playing Sandy and Danny in the musical "Grease." Artistic director Russell Harvard, however, interrupts.

"You are performing for the audience. They came to see you. They want to see your face," he instructs in American Sign Language. "You're looking too much at each other." Kubes and Alanis are deaf actors in the Texas School for the Deaf's presentation of "Grease."