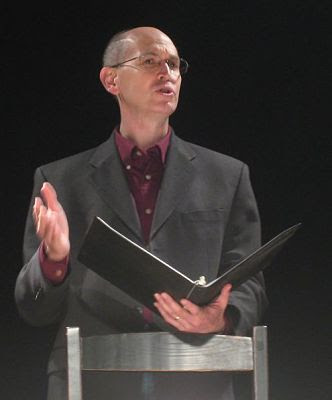 The speech for World Theatre Day written by Brazilian author Augusto Boal was read by Robert Faires of the Austin Chronicle. Boal's comments are brief, but they sum up a lifetime of theatre, political activism and teaching, following his arrest by the Brazilian military government in 1972 and twelve years in exile. Boal's principal concept is expressed immediately in the opening:

Even if one is unaware of it, human relationships are structured in a theatrical way. The use of space, body language, choice of words and voice modulation, the confrontation of ideas and passions, everything that we demonstrate on the stage, we live in our lives. We are theatre! . . . .

One of the main functions of our art is to make people sensitive to the “spectacles” of daily life in which the actors are their own spectators, performances in which the stage and the stalls coincide. We are all artists. By doing theatre, we learn to see what is obvious but what we usually can’t see because we are only used to looking at it. What is familiar to us becomes unseen: doing theatre throws light on the stage of daily life.

About 30 persons came to the Dougherty Arts Center for the Theatre Day commemoration, the staged reading of Caryl Churchill's Seven Jewish Children, and the discussion of the play. The group was diverse. By the end of the event we'd encountered students, actors, a playwright, the organizers, a Jewish couple in their late 60s, a Palestinian man, a Frenchwoman and two women from Palestine.

Seven Jewish Children is a stark piece of only about 170 lines, divided into seven sections of unequal length. Playing time is hardly ten minutes, and one can scan the text in far less than that. The version available on-line from the Royal Court Theatre contains no stage directions, other than the comment that the piece may be read or performed without fee anywhere, by any number of people.