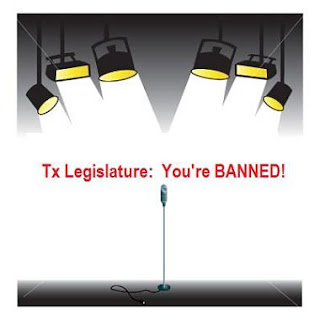 UPDATE, May 28 from Travis Bedard, with contact info for your representatives

NOTE: Following report is OBE ("OVERCOME BY EVENTS"), as detailed in updates, but remains here as a record of the political and legislative process.

It appears that while we haven't been looking, the Texas legislature has passed a bill that will put some theatrical lighting designers out of business.

This bill, introduced by Rep. Wayne Smith (R) of Baytown, will require state registration and licensing of lighting designers and will limit licenses to already registered or licensed engineers, architects, landscape architects and interior designers.

The House passed the bill on May 3 and the Senate passed it today, May 27. Next stop is a House-Senate conference to reconcile differences -- the paragraphs on lighting design were inserted by the Senate. Rep. Smith may try to eliminate them in conference. If that doesn't work, the bill will move to the Governor's office for signature.

Excerpts from Tx HB 2649 are carried on jmonlight.com, accompanied by an undated, probably belated squawk from the International Association of Lighting Designers (IALD).

This one could be sitting on the Govenor's desk as part of the thick bundle of laws the legislators are passing in the scant days remaining in the session. Governor Rick Perry would have twenty days to act. Or not act.

What does that mean? Specifics (with ALT emphasis added) from the on-line primer of the Guide to Texas Legislative Information:

Suggestion: Contact your state representative to voice opposition and contact Rep. Smith's office (tel. (512) 463-0733 and fax (512) 463-1323). Travis Bedard reports that Smith's staffers already have a prepared script, so they've been getting calls. Anticipating the worse, you can go to the "contact" page for the Governor's Office, where you'll find an on-line form to express your opinion on this one. Unless Tx HB 2649 is stopped, some talented theatrical lighting designers are going to be out of work. And theatres will be none the better for the Lege's well-intentioned meddling.