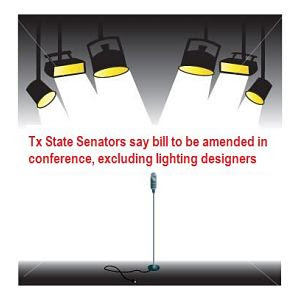 Further to the proposed amendment to Texas House Bill 2649, which would have made obligatory the licensing of lighting designers of all professions, Managing Director of Austin Shakespeare Alex Alford passes along encouraging news:

CALL TO ACTION RE: LIGHTING DESIGNER LEGISLATION
From:"Alex Alford"
From Ken Shepardson:
Pass the word: According to Rep. Smith's office, HB 2649 is going to a House-Senate conference committee tonight. Rep. Smith is going to try to have the offending Senate amendment removed so that his original bill, which does not affect lighting designers, is the final version voted on and passed by both houses.

I did just speak with Texas Sen. Kip Averitt's office about his Senate amendment to HB 2649, the one that affects lighting designers. Sen. Averitt's amendment will be removed from the bill. Lighting designers will no longer be included in the legislation. This comes from his office, who suggested I might spread the word.

Finally, once more from Sen. Deuell's office, if the bill does somehow make it to the Governor's desk with the amendment--and there's no way it should now--the word is that the Governor might veto it. Can't be sure . . . but that's the word.

Send this out to anyone who might be interested. And, for good luck next time, IF Sen. Averitt's office is right and his amendment is removed, everyone should send a short "Thank you" email to Sens. Deuell and Averitt and to Rep. Wayne Smith. IT CAN'T HURT!