Upcoming: No One Else Will Ever Love You by Katherine Craft, private location, August 28 - September 12 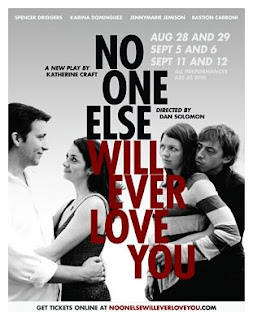 No One Else Will Ever Love You

Rick and Jen are back in the country after their honeymoon, and they've invited Rick's best friend Nora, along with her boyfriend Charlie, over for dinner. As they open their fifth bottle of wine, Rick and Charlie both struggle with their desire to dominate the room - and more importantly, Nora. Staged in the living rooms of local volunteers, this one-act play about the chess matches that some men play for power over the women in their lives, and the subsequent effort to be no one's pawn, presents a visceral and immediate theatrical experience.

All tickets are $10 and available online at www.nooneelsewilleverloveyou.com. Venue addresses will be given after ticket purchase. All venues are centrally located in Austin.

Labels: Bastion Carboni, Dan Solomon, Jennymarie Jemison, Karina Dominguez, Katherine Craft, No One Else Will Ever Love You, Spencer Driggers