At Home at the Zoo, Edward Albee, Palindrome Theatre at the Off Center, November 5 - 21 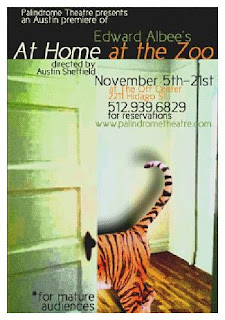 Edward Albee once commented, "If you can sum a play in one sentence, that's how long the play should be." That's a fine bon mot and a cutting challenge to all who try to work in the odd art form of the theatre review.

Albee has challenged and puzzled the public, the theatre community and academics since The Zoo Story, the second half of this theatre evening, first took the stage in Berlin 51 years ago. I have on my desk the Austin Public Library's copy of the Prentice-Hall collection of essays on Albee, published in 1975, where writers try to deal with The Zoo Story, Who's Afraid of Virginia Woolf and other pieces written in the opening decades of the playwright's career.

I remember vividly reading The Zoo Story, probably for a university class back in the late 1960's -- when it was new, so to speak, and path-breaking, a glimpse beyond the comfortable categories of American drama. It's interesting that a couple of the writers in the 1975 compendium -- which I've glanced at but not read attentively -- seek to interpret the piece through the lens of the Theatre of the Absurd. Martin Esslin, inventor of the term, in fact faults Albee for not pushing the situation to absurdity, for not taking the rant and ultimately the threats of a deranged New Yorker far enough.

But that was the fascination of the piece: that its poetic intensity of horror was completely plausible. Certainly to those us in the hinterlands, and probably even more so to New Yorkers, even in the comfortable late 1950's. Hasn't the poetry of threat and violence been played out over and over again in the past 50 years, distilled and dealt out by the media in doses that make The Zoo Story seem simple and sensible by comparison?