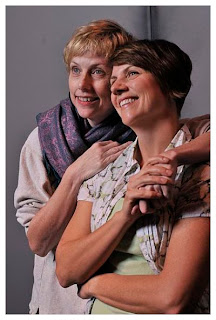 Annie Baker's Body Awareness is a well crafted, attractive little comedy with lots of heart. I hadn't really expected that, for the Hyde Park style is more often sardonic, grimly humorous or menacing. After all, director Ken Webster had been using a publicity shot of the cast in which they looked as if they'd been arrested by the Austin Police Department at a wild party.

Because of a trip out of town, my first chance to attend was a Thursday night. That's usually a quiet night at any theatre here, but Body Awareness boarded like an airliner, accommodating wait-listed passengers. Word had gotten around.

The theatre's promo video sets the characters vividly, so I knew that Stephen Mercantel as Jared was an in-your-face young man frustrated with the world, not in small part because everyone insists that he has Asperger's syndrome -- an inability to empathize or adapt to social conventions, so that he's always asking difficult questions and making observations that come across as unfeeling or cruel. The video captures some of Baker's cleverest turns exploiting that social inability, when Jared is trying to get information about sex and sexuality from adults who are acutely uncomfortable with his questions.

But Baker's play doesn get stuck there, as a TV situation comedy might get stuck exploiting a single character trait or situation. Instead, she succeeds in giving Jared an unlikely appeal and depth. He's enchanted with words and their etymologies; he is reading the Oxford English Dictionary line by line in hopes that someday, despite his lack of formal education, he might become a lexicographer. His unkind, probing questions about human relations and sex arise not from indifferent observation but because he has a deep need to be liked and appreciated.