The Red Balloon, Tongue and Groove Theatre, Rollins Theatre, May 20 - 30 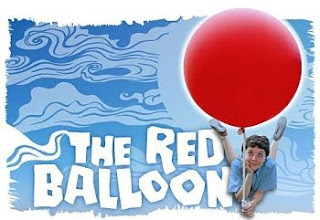 In 1956 the 34-year-old French filmmaker Albert Lamorisse wrote and filmed the slim, imaginative, 34-minute fantasyThe Red Balloon. His son Pascal played the central role, that of a quiet, lonely schoolboy who discovers a magical red balloon -- one that recognizes him, follows him with the simplicity and loyalty of a pet dog, and provides an escape from the emptiness of barren city life. Lamorisse's daughter Sabine plays the little girl who has found a similar but blue balloon. The film is a lyrical meditation on the imagination of childhood. It won award after award, including a U.S. Academy Award for best original screenplay -- the only time in the history of the Oscars that a short film received a major Academy victory outside the short film category.

It's a wonderful piece, largely without dialogue and scored to a whimsical score by Maurice Leroux. It was widely distributed and admired; copies of the 16 mm film resided in many school libraries in the United States, where successive generations were surprised and enchanted by it.

David Yeakle, animator Leah Lovise and composer Justin Sherburn have taken that elegantly minimalist film, inflated it, expanded it, decorated it and rescored it. Their production of The Red Balloon, "adapted freely from the film 'Le Ballon Rouge,'" is equally captivating but in a different way.