Book Recommendation: A Year in the Life of Shakespeare by James Shapiro (courtesy of the Ransom Center and Penelope Lively) 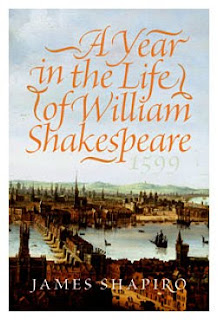 In its "Cultural Compass" blog entry of September 21, the Harry Ransom Center at the University of Texas passes along the responses of its prominent supporters to the invitation, "Name the book of the decade."

I like books that leave me better informed, that surprise me, that change my view. James Shapiro's 1599: A Year in the Life of William Shakespeare did all that. I suppose that I held—vaguely—the Coleridgean view that Shakespeare transcends his age "as if of another planet." Shapiro demonstrates with elegance and authority how the work of that year—Henry V, Julius Caesar, As You Like It, first draft of Hamlet—sprang directly from the action and the anxieties of the age: the war in Ireland, the fear of the Spanish, the question of the succession, and the possibility of Elizabeth's assassination.