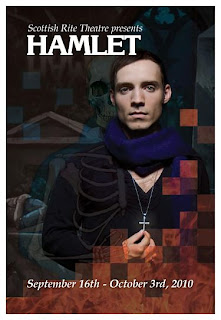 Those lustrous eyes, that bony frame, that complexion sicklied o'er with the pale cast of thought -- many of us believe that Justin Scalise was born to play Hamlet.

He has certainly trained for Shakespeare and for this role, in New Orleans, in England, and for the past three years in Austin. We have seen him as Bottom, Feste, Adam & Silvius, Don John, Mercutio and Lucio. And even Hamlet, freeze-dried, for Austin Shakespeare's 2008 and 2009 World's Fastest Hamlet.

This Hamlet drected by Andrew Matthews for the Scottish Rite Theatre is a keen, intelligent, entertaining and gripping production. Scalise has the principal role but this evening offers much more than just an outing for his fan club.

This cast knows how to speak the speech. Babs George as Gertrude, Harvey Guion as Claudius, Robert Deike as a whole suite of ordinaries, Brock England as Horatio, Chuck Ney as Polonius. . . the verse comes trippingly on those tongues. It's a thrill to hear it delivered articulately, with convincing scansion and appropriate targeting and emotion. The action is swift but unerringly certain. There are moments when one would like to see a bubble of silence as a character reflects or absorbs the meaning of something just said. But anyone who has studied the play, read it or seen any other version of Hamlet will follow the players all the way and will be on the edge of his seat.

Matthews has put them into contemporary costume but does not burden the play with unnecessary concept or gimmickry. No telephoning in performances, no AK-47s, no roller skates or cowboy hats. The familiar, haunting action develops immediately before us in the intimacy of the Scottish Rite Theatre, using a minimum of portable furniture placed as needed before various of its intricate trompe-l'oeuil 19th century painted backdrops. The striking, appropriate music before the play is recorded.

In this version, the play's the thing.