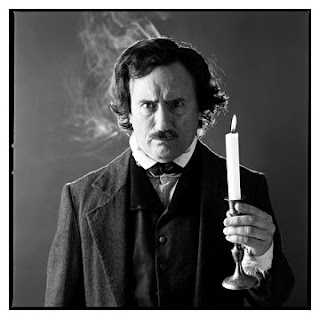 an evening with Edgar Allan Poe

"...a must-see for anyone interested in tales of horror and the supernatural."- metromix

"GO ...a gorgeous rendition of a tragic clown whose heart has been cleaved open by loss and regret... beautifully directed by Stuart Gordon" - LA Weekly

From Tim League at Fantastic Fest: "Dennis Paoli wrote the play, using a compilation of historical accounts, actual monologues, articles, letters and Poe's own words to construct the definitive portrait of American's most famous macabre poet. The play ran for months in Los Angeles and received unanimously glowing reviews. When I saw the show in November, we immediately invited Jeffrey Combs and director Stuart Gordon to come to Austin for this year's Fantastic Fest. Although not a film, NEVERMORE was the very first show booked for this year's festival. We will have 2 screenings open to Fantastic Fest badge holders with additional screenings available to the general public."

Director Stuart Gordon's description of the show: "NEVERMORE is our attempt to recreate the public recitals that Edgar Allan Poe presented during the last few years of his much-too-short life. Set in 1848, a year after the death of his beloved wife Virginia (and a year before his own), Poe had become internationally famous as the author of 'The Raven' and his 'Tales of the Grotesque and Arabesque.' But his fame did not provide fortune and so he was constantly seeking financial security and respect from the literary establishment. As a Southerner by breeding, raised in Virginia, he was looked down upon by the New England-based writers of the time, which included Ralph Waldo Emerson, Washington Irving, and Edgar’s arch-nemesis Henry Wadsworth Longfellow.

"This is Poe in his own words. Our text is taken from his letters and essays and we have based our evening on reviews and reports of his actual appearances. Our goal is to present a sense of the fascinating man behind the poetry and brilliant tales, a man who could be his own worst enemy, and whose life was even more bizarre and tragic than his strangest story."

Click 'Read more' for a review and for a 4 min. video interview with actor Jeffrey Combs and director Stuart Gordon, posted by Backstage Magazine