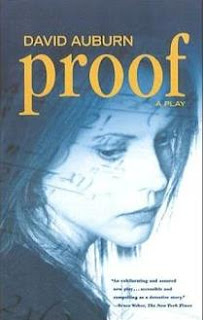 Proof explores complex relationships - similar to a mathematical equation - between a father and daughter, rival sisters, and two young lovers. Catherine, a young woman with unmistakable symptoms of clinical depression, takes care of her former genius of a mathematician father through a long struggle with mental illness. While celebrating her 25th birthday, she begins to wonder how much of her father's genius - and madness - she's inherited.
Directed by Lara Toner and Cyndi Williams, the Austin production features Molly Karrasch (Educating Rita), Tom Parker (The Trip to Bountiful, Picasso at the Lapin Agile), Lara Toner (The 39 Steps), and David Meissner.
Performances run Thursdays through Saturdays at 8 p.m., and Sunday at 5 p.m. Tickets are $20, with half-price tickets for students.

Austin Playhouse is located at 3601 S. Congress, Bldg. C, in the Penn Field Center. For reservations and more information, call (512) 476-0084 or visit www.AustinPlayhouse.com.
Posted by Michael Meigs at 11:03 AM