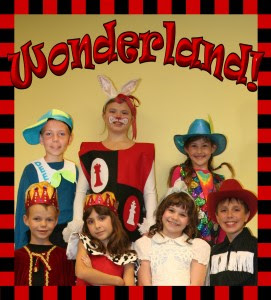 Wonderland!
The Musical Misadventures of a Girl Named Alice
Book adapted by James DeVita
Music and lyrics by Bill Francoeur
Directed by Engela Edwards
Family musical performed for and by youth.

Also available for your school, church, club, party, or library.

Wonderland! The Musical Misadventures of a Girl Named Alice will be performed in Austin this spring for hundreds of elementary school kids. It will also play for hundreds more this summer in College Station, where the cast will perform alongside 14 other youth companies who represent the best children's theaters from around the state. Contact director Engela Edwards at 512-303-5516 if you'd like to sponsor a 40-minute performance of Wonderland! at your school, church, library, or club this spring.

Posted by Michael Meigs at 4:22 PM