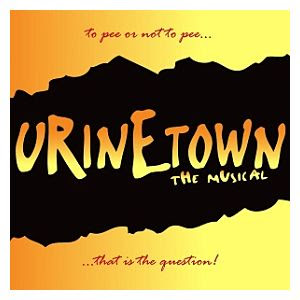 You’re In It Now: Stepping Gingerly into Urinetown: The Musical

Two minutes into the opening number of Urinetown, I felt my heart give a quiet groan: was I really about to witness two straight hours of potty humor? There must have been at least twenty different sweetly sung references to micturition in the first two minutes alone and with "p" being such an easy letter to rhyme, it could go on as long as rest-stop after a four hour car ride.....

Fortunately, this was far from the case. Lyricists Mark Hollmann (who also wrote the music) and Greg Kotis seemed to void themselves on the subject promptly. The plot takes over, rapidly revealed by a narrator who steps out of the story to make sardonic remarks about the play’s aImagection and about the genre of musical theatre. One hardly has time to worry about the plot, for the musical numbers are at the forefront and they frolic and twist through various genres and moods with the playfulness of a child choosing records by the covers alone.

Urinetown is a Tony-award-winning musical that debuted on Broadway in 2001. Its odd title, subject matter, and blatant, yet tongue in check, anti-musical commentary caused the creators some trouble in finding it a home. They succeeded in placing it the New York International Fringe Festival.