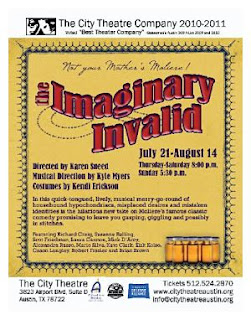 The 85-seat house at the City Theatre was agreeably full on the opening Friday of Karen Sneed's staging of Molière's The Imaginary Invalid. A full house of attentive spectators is always a boost to the cast. Amusement is amplified and reactions build. The natural curiosity of the audience becomes rapport with actors and characters. Comedy, by provoking shared laughter, binds the members of each evening's audience indefinably, in a fashion that differs from night to nigh

That positive crowd effect may have been linked to the fact that 16 actors inhabit this farce, portraying 31 characters. The City Theatre deserves to enjoy a setting similar to that initial "family and friends" effect for the upcoming three weekends of its run.

Effective stage comedies snare us with quirks and jokes, then elaborate and build the fun with absurdities and unexpected turns of plot. That's Molière's method here. Grumpy, stingy hypochondriac Argan bemoans his miseries and the pile of bills from physicians and pharmacists for hair-raising and trouser-dropping treatments, directed mostly via the opening of his lower colon. (During our years abroad we discovered to our discomfort that contemporary French medicine retains an affection for just that therapeutic channel.)

Argan initially rails out loud to himself and at his irreverent serving girl Toinette. We then see him exercise his arbitrary petty tyrannies over his marriageble daughter Angélique, at the same time that he's a witless dupe of his gold-digging young wife and a procession of quacks. Just about everyone onstage is intriguing against everyone else, and we the audience have the cheerful feelling that we're at least two steps ahead of each of them.