cordially invites you to ~

by Hannah Kenah and Jenny Larson

“Have I failed today? Or have I not?” –Emily Post

Women are crazy. This condemnation is often spoken in popular culture as fact. As infuriating as it can be to hear radio personalities or TV sitcoms trade on this condemnation, it seems the best way to defy it is, in fact, to embrace it.

Guest by Courtesy is the story of two cousins. One is married, wealthy, and fancy; the other is single, poor, and drab. We find these cousins unfolding their bizarre relationship over the course of a failing tea party. The cousins are little girls, society women, clowns, bitter rivals, and family.
Between the high physicality, the archetypal characters, and the bawdiness of these two cousins, the play possesses some kinship with theatrical clowning. As with any good clown, the cousins are simple, but they possess love and heartbreak beyond their own comprehension.
Will these women, hovering at the edge of sanity, go crazy in the end or instead manage to set the world on its head?

For MATURE AUDIENCES only. 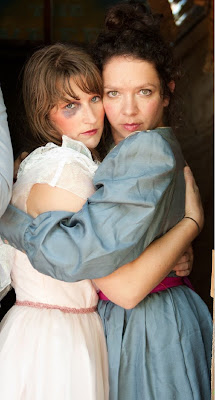