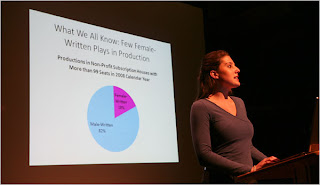 When more than 160 playwrights and producers, most of them female, filed into a Midtown Manhattan theater Monday night, they expected to hear some concrete evidence that women who are authors have a tougher time getting their work staged than men.

And they did. But they also heard that women who are artistic directors and literary managers are the ones to blame.

That conclusion was just one surprising piece of a yearlong research project that both confirms and upends assumptions about bias in the playwriting business.

“There is discrimination against female playwrights in the theater community,” said Emily Glassberg Sands, who conducted the research. Still, she said, that isn’t the whole story; there is also a shortage of good scripts by women.