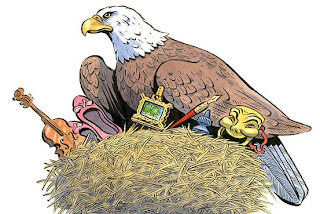 available at the on-line edition

Obama Plays It Safe With The Arts

By DAVID A. SMITH

Last week President Barack Obama announced Jim Leach as his choice to lead the National Endowment for the Humanities. Mr. Leach, an Iowa Republican who served 30 years in the House before losing his bid for re-election in 2006, notably went against his party last year by endorsing Mr. Obama, not John McCain, in the presidential race. Now that President Obama has picked Mr. Leach for NEH and Rocco Landesman, a successful Broadway producer, to head the National Endowment for the Arts, the Obama cultural team is complete.

Of the two, Mr. Leach is more surprising -- if only because his cultural qualifications aren't as immediately obvious. But he was a solid supporter of the endowments while in Congress, and both the National Humanities Alliance and Americans for the Arts recognized his contributions. He's also familiar with academia, having recently taught at Harvard and Princeton.

Still, Messrs. Leach and Landesman are probably not the choices initially expected from a president who was being lobbied just a couple of months ago to do something as bold as create a cabinet-level department of arts and culture. These are the choices, rather, of a president who doesn't want this to be a political fight. With these nominations it's also clear that Mr. Obama is not making a statement that great change is needed at either agency. This is not to disparage these choices -- both of which, in addition to being rather surprising, are quite good, at least in the eyes of those who think both endowments are already following a wise course. In fact, given the constituencies that rallied most vociferously behind Mr. Obama in the campaign, his choice of these two men ought to elicit a sigh of relief from conservatives.

Taken together, what might these two nominations mean for the relationship between the government and the arts under the Obama administration? Do they signal any new directions for these agencies?

Not necessarily. Both endowments currently enjoy considerable support in Congress and, given the history of the NEA in particular, this is no small achievement. While some supporters of the arts are quite upset with the direction the NEA has taken in the past few years (more about this later), there's no denying that it's in better shape than it ever has been. It enjoys broad support in Congress in part because it has steered clear of controversy and extended its good effects.