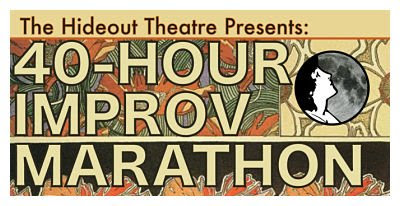 UPDATE: Review in the Austin Chronicle, July 2, by Robert Faires, who sat in on hours 39 & 40, Sunday morning: "sharp, focused and riotously funny."

An Austin institution known for its improv is getting a second life after 10 years of comedy in the Capital city.

Roy Janik, Kareem Badr and Jessica Arjet are taking over The Hideout Theatre, a local improv comedy club where they were all once students. Despite the lease running out and the previous owner stepping down after 10 years, these three wanted to keep the laughs going.

“We didn’t want to see it die because that’s where we learned improv, and we love it,” stated Janik. 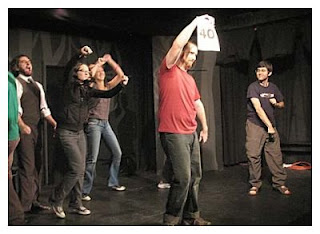 Arjet even put her life’s savings on the line. “I have an inheritance, which is all my savings in the entire world. My husband was like, are you sure you want to do this?”

She is sure, she says, because you can’t put a price on making people feel good.

“Who needs material things when you have theater?”

In order to accomplish their goal of reviving the theater, the three new owners will be hosting a 40 hour improv marathon next weekend. This marathon will not only help save the theater, but will also fund other acting programs in Austin.

Badr said, “It’s the worst idea ever, it’s going to be amazing.”

[photo by Peter Rogers, published in the Austin Chronicle]