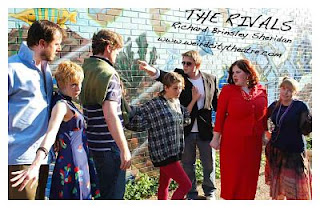 UPDATE: Review by Hannah Kenah in the Austin Chronicle, July 24

Weird City Theatre Company to produce an adaptation of THE RIVALS, by Richard Brinsley Sheridan and directed by John F. Carroll. The WCT adaptation takes the classic comedy out of the 18th Century and into the 1980s with a great deal of inspiration coming from the films of John Hughes.

Tickets are $15.00 for adults and $12.00 for children, seniors and students (with ID), and group rates are available. Tickets can be purchased at our website, www.weirdcitytheatre.com, or by calling 512.745.2636

Weird City Theatre's mission is to encouraging the growth of the artist and represent the uniqueness and vitality of Austin through re-envisioned classics and original works, cross-media, and merging a new audience with the traditional. Keeping a child-like since of play, we focus on the process of the actor and are playing our part to keep Austin weird!