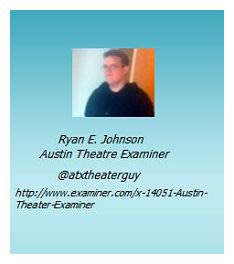 Ryan E. Johnson, who regularly posts his reviews of Austin theatre on examiner.com, is publishing slates of his picks for the best in 2009.

His nominations for comedy for his Austin Theatre Examiner (ATE) awards are up at the Examiner.


His nominations for musical theatre went up on December 22.

He posted his slate for drama on December 24.

He posted his slate for special awards on December 29.

He posted his "best of 2009 picks" on January 1. Responding to his invitation, his readers chose the Hyde Park Theatre production of Harold Pinter's The Collection as best production of the year.