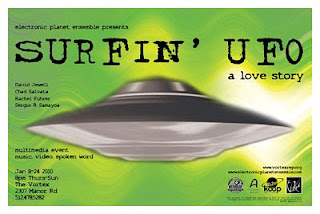 Feel the power of nature riding inside the curl of a monster wave. Fall in love with a space girl. The Anunnaki are knocking at your door, and one of them looks just like Brigitte Bardot.

Planet X, 2012, crop circles, Roswell, ancient astronauts, UFO sightings, and alien abductions. Something is going on here, and you don’t know what it is, do you, Mr. Jones? Or, maybe you haven’t noticed because you’re too busy surfing.

The mysteries of Sumer and ancient Egypt meet Surf Boy and Space Girl, rare star crossed lovers, experiencing first love in all its wave crashing, heart pounding, supernova glory. Ride the tsunami of love, wipe out, get pounded, and ride again. Bend and fold the space-time continuum. Exceed the speed of light. Is it a particle or is it a wave? Uh, duh, it’s wave, dude…it’s totally a wave.

Also, in the lobby, an International Mail Art show will display all mail received concerning the themes of Surfin’ UFO before and during the run of the show.

From the creators of last season’s hit Spaceman:Dada:Robot. Produced in association with Vortex Repertory Company.

Vortex and Electronic Planet Ensemble are funded and supported in part by the City of Austin through the Cultural Arts Division and by a grant from the Texas Commission on the Arts and an award from the National Endowment for the Arts, which believes that a great nation deserves great art.