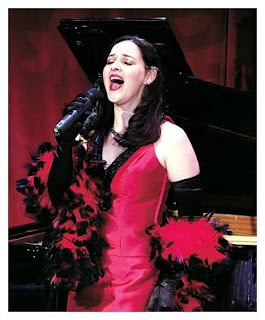 Katherine Kloc of the Daily Texan writes a balanced, perceptive and informative review of the opening at the Zach Theatre of the newest edition of David Sedaris' The Santaland Diaries, now entering its twelfth year.

The accompanying photo of Meredith McCall is by Kirk R. Tuck.

"[Meredith] McCall’s vocals are impressive, and she has a strong stage presence, but the highlight of the first half is Randolph’s performance of 'Six to Eight Black Men.' It is another work by Sedaris that tells the story of Holland’s version of Santa Claus, Saint Nicholas, his crew of six to eight black men and their interesting antics during the holiday season. It is the only piece that seems truly compatible with The Santaland Diaries.

"The success of The Santaland Diaries rests in the cast’s ability to interact with the audience, which is aided by Zach Scott’s characteristically intimate stages. The stage itself is circular and surrounded on all sides by rows of seats, allowing Randolph and McCall to make use of its entirety and to mingle with the audience during the show. Due to this setup, members of the audience are unwittingly integrated into the development of the show while still remaining in their seats.

“The Santaland Diaries provides an appreciated counterbalance to the warm, feel-good classics such as It’s a Wonderful Life and A Christmas Story with Crumpet’s stark humor."