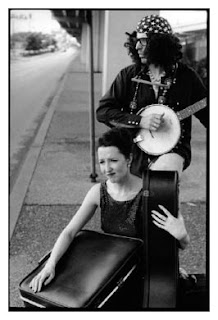 Sloppy Sean returns to his old stomping grounds at The Hyde Park Theatre for two evenings of comedy, mayhem, and Rock-a-Billy. The Lonely Highway has been called a cross between Pee Wee's Playhouse and The Porter Waggoner Show, with a dash of Andy Kaufman.

Backed by the band Glambilly, Sloppy Sean will take you where few audiences dare to go.

Lonely Highway was Best of FronteraFest in 2002.

"The only kind of wrong Sloppy Sean can do is the kind of wrong Andy Kaufman did, because they were on the same frequency, Kenneth," according to the Austin Chronicle rave. The Daily Texan called the show "extremely out of the ordinary . . .a most delightful and captivating night at the theater."

More from the Daily Texan review of Sept 16, 2002 (updated January 9, 2009) by Weezie Melanchon:
"Hans Frank portrays the peculiar loner, Sloppy Sean, with a remarkable authenticity. With his apparent musical skill, his knack for storytelling, and his rare channeling ability, Sloppy Sean is one frenetic character. Nevertheless, throughout his performance, he offers interesting facts and sound advice on various aspects of life, covering everything from love, religion and murder, to inflatable dolls and politics. He sends out the noteworthy messages to never join a cult or murder an ex - and who knew Tecate was Spanish for Schlitz? The veteran draws life lessons from his relationship with his true love, Yo-Yo and his days in Boy Scouts when he encountered his first (and last) homosexual experience. He states his perception of what Sex and the City has done to the women of today and what women, in result, have done to the men of today."
Posted by Michael at 9:47 AM