The Importance of Being Earnest by Oscar Wilde, Austin Playhouse, January 14 - February 13 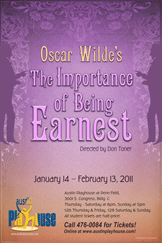 This "Trivial Comedy for Serious People" opened in 1895 and it was the last shining moment for Wilde's career as writer and dramatist. Soon afterwards he found himself in court, accused of immoral behavior and then sentenced to gaol. Because of that scandal the original production closed after only 86 performances. Since then it has become one of the most dependable and regularly revived comic satires on the boards. 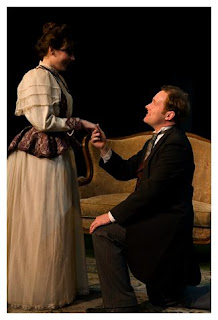 Wilde's earnest young men show themselves of strenuously conventional Victorian morality in society but entirely subversive in their private lives.

Both Algernon Moncrieff (Jason Newman) and Jack Worthing (Benjamin Summers) have secret identities. Algernon goes "Bunberrying," using the excuse of a mythical ailing relative to escape from unappealing social engagements and to sail off on devil-may-care exploits.

Jack uses the excuse of his mythical brother "Earnest" to get away from the tedium of the country and the responsibilities of his guardianship for the fetching but bubble-headed Cecily, his ward and the daughter of his deceased benefactor. Masquerading as "Earnest" while in London, Jack is courting Algy's cousin Gwendolen.