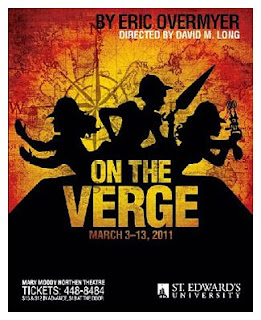 On The Verge (Or, The Geography of Yearning)

Advance tickets are $15 for adults and $12 for students and seniors. All tickets are $18 at the door. As special Student Night production on Mar. 10 at 7:30 p.m., offers half price tickets to those with a student ID.

St. Edward’s University Theatre Program goes on an expedition with playwright Eric Overmyer’s wild theatrical ride, On The Verge (Or The Geography of Yearning). Equipped with optimism, humor and a pound of pluck, three Victorian women set off on an expedition to Terra Incognita, uncharted territory. Armed with their umbrellas, backpacks, and terribly large vocabularies, the trio encounters a Beat-poetry spouting troll, Mr. Coffee, a Yeti, Cool Whip and a 1950s presidential campaign.

Playwright Overmyer is best known as a writer and producer for such acclaimed television series as “Treme,” “The Wire,” “Homicide: Life on the Street,” “New Amsterdam,” “St. Elsewhere,” “Law & Order,” and “Law & Order: Criminal Intent.” His plays include Native Speech, In a Pig’s Valise, In Perpetuity Throughout the Universe, Mi Familia Tropicano, Mi Vida Loca, Dark Rapture and The Heliotrope Bouquet, among others. He is the recipient of the Le Comte de Nouy Award for playwriting, a McKnight Fellowship, and a New York Foundation for the Arts Fellowship.

Posted by Michael Meigs at 8:40 AM