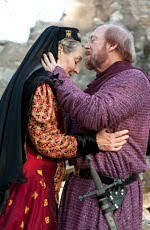 The Lion in Winter

Performances are Thursdays-Saturdays at 8:00 PM and Sundays at 3:00 PM

All performances are at the Sterling Houston Theatre at Jump-Start, 108 Blue Star in the Blue Star Arts Complex, 1400 S. Alamo. The theatre is handicap accessible…please call 210-589-8450 for special arrangements.

What do you get when you mix a dysfunctional family, with crown envy and a hearty sex drive? A reality TV show, perhaps? No, actually, it’s The Lion in Winter by James Goldman. King Henry II of England has three sons by Eleanor of Aquitaine: Richard, Geoffrey, and John. He wants the kingdom to stay united after his death, but all three sons want to rule and it is likely to be torn apart by revolution. Henry favors the youngest John, while Eleanor favors the eldest, Richard. Middle son Geoffrey hopes to play both ends against each other and come out on top. Henry would like to have another heir by his mistress Alais, but that would only add to the confusion. Uneasy is the head on which the crown lies, and uneasy the truce between a matchless king and queen. Often revived, this play was the basis of the Oscar-winning film which starred Peter O'Toole and Katharine Hepburn.


"A work of intelligence, astringent wit, and much theatrical skill."-The New York Times