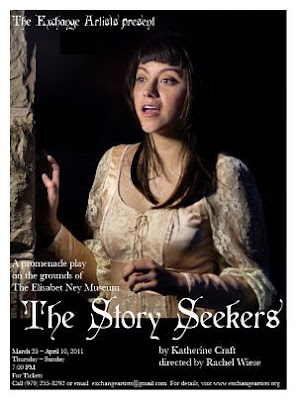 A new play on the grounds of The Elisabet Ney Museum

Tickets are a suggested $15 donation and can be reserved by emailing exchangeartists@gmail.com or calling (979) 255-8292.

A band of children live as prisoners in an alternate world, never changing as long as the storyteller who trapped them holds the endings to their stories in her book. Some of these characters are familiar – Lupe, who escapes La Lorona; Abini, the Yoruban miracle child; and Hans, who followed the Pied Piper out of Hamlin – but there are other children caught in the forest as well. Only when a young princess, Bet, flees her comfortable castle after catching a glimpse of the future through a magic window and finds herself trapped in the storyteller’s world do the children find hope of escape. Hope in the form of a gardener’s son: Bet’s best friend Gil.

THE STORY SEEKERS, a new play by Katherine Craft, developed in collaboration with Exchange Artists actors, transforms the grounds of Hyde Park’s landmark castle into the setting of a fantastical drama. The performance is participatory in nature with actors leading the audience throughout the grounds as the stories and the mysteries of the space unfold.

In the event of any rain cancellations, makeup performances will be held April 15, 16, and 17. Please bring a flashlight and wear shoes for walking on the museum grounds.