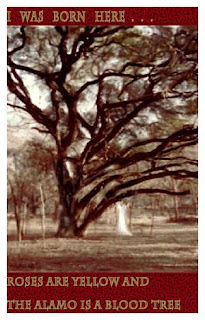 “I was born here”
a multi-media tableau

The original poem by Barbara Renaud Gonzalez, also titled “Remember El Alma,” forms the cornerstone of “I Was Born Here,” a recurring poignant line in the poem that has been reinterpreted in multiple forms for this event. In a new film, edited by Mirasol Riojas, currently a PhD candidate in film at UCLA, with camerawork by award-winning cinematographer Pocha Pena and art direction by Virginia Grise, 6-year-old Inez Barrera charmingly interprets the poem from a child’s point of view In the live performance at Bihl Haus on March 24th, an ensemble cast--Marisela Barrera, Monique Cortez, Natalie Goodnow, and Olupero Aiyenimelo—will re-stage the poem to haunting melodies composed and performed live by Rachel Cruz, PhD.
This live production will be set amid a new site-specific installation by Deborah Kuetzpalin Vasquez that features four large-scale painted tapestries depicting goddesses who symbolize the cardinal directions, with which Bihl Haus Arts aligns perfectly. Fresh flowers and fronds will transform the gallery space into a dreamlike world situated beneath a canopy of shimmering metallic-toned branches and boughs.
This all-female production, an official CAM event, also celebrates Women’s History Month. Please arrive at Bihl Haus by 7 pm to enjoy the full performance. A suggested donation of $5 at the door would be greatly appreciated.
Remember the Bihl Haus!
Posted by Michael at 8:56 AM