Upcoming: The Pirates of Penzance, Harmony School at Hill Country Community Theatre, May 6 - 7 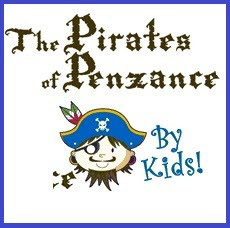 It’s a story of pirates and fair maidens, of honor and deception, wrapped up in a comedic opera.

Once again, Hill Country Community Theatre and Harmony School of Creative Arts are joining forces to present a student version of Gilbert and Sullivan’s Pirates of Penzance. Two performances will be presented at the theatre, 4003 FM 2147, Cottonwood Shores, one on Saturday, May 7, at 7 p.m., and the other on Sunday, May 8, at 2:15 p.m.

The play centers around the honorable Frederic who plans to leave the piracy on his twenty-first birthday. Desperate for a wife, he falls in love with young Mabel, one of several daughters of the Major-General. Indeed, the Pirate King intends for all the pirates to marry daughters, to their father’s grief. Enter some bumbling police and new information about the terms of Frederic’s indenture to the pirates, and the fray begins.

The 15-member cast, ages 9-14, has been rehearsing weekly at Harmony School since early February, under the direction of David Bend and with vocal coaching from Robert Schneider. Chandra Irvin serves as the choreographer.

Posted by Michael Meigs at 8:43 AM