For Those Who Took Us In 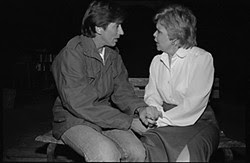 She was as generous as actors come, onstage and off. When you played a scene with her, she gave you her full focus, as if whatever you had to say was far more important than anything she might utter. And no matter how insipid the line or how poor your delivery, she received it as openly as the heartfelt declaration of a trusted friend. And that didn't change when the curtain came down and the cast inevitably headed off to some watering hole. She talked to you and laughed with you and included you as though you'd been a part of the gang always, as though you belonged.

That makes a difference when you're 23 years old and it's only your third show in town and you're stepping into a role that another actor had filled for the first few weeks of rehearsal and everyone else had already bonded with him in that way that casts do.

Read more at the Austin Chronicle. . . .