This is a two-women show about one woman, who, to free herself from college debt, joins a Wyoming goat farm she inherits from her occult-leader birth parents. There is seduction. There is beer. There are biscuits. And let’s not forget about the goats. 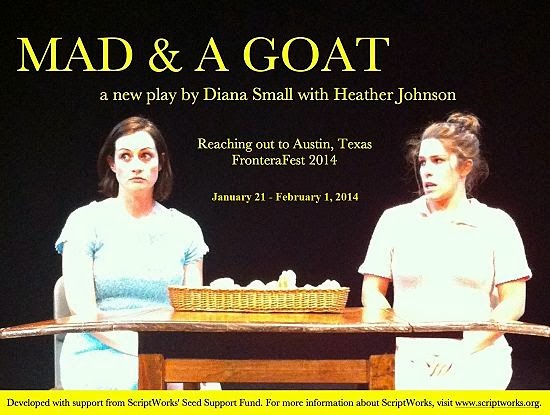 FronteraFest is the ideal setting for Mad & A Goat's Austin premiere. The play had a workshop production in the first ever Fort Collins Fringe Festival at Bas Bleu Theatre last August with the intent of further developing the work for an Austin audience.

Diana Small, currently a playwriting fellow in UT’s Michener Center for Writers, premieres her new play Mad & A Goat in this year’s Long Fringe at FronteraFest at Salvage Vanguard Theater. The play shows four times: Tuesday, January 21 at 7 pm, Saturday, January 25 at 3:30 pm, Tuesday, January 28 at 9:15 pm and Saturday, February 1 at 8:45 pm. Tickets are $7 and can be purchased online at fronterafest.com.


Diana also acts in the show with longtime collaborator Heather Johnson, who ventures to Austin from her home in Fort Collins, CO to perform in the play. Mad & A Goat was developed with support from ScriptWorks’ Seed Support Fund. Also contributing to the play’s development is Rachel Gilbert, assistant directing and stage managing, and Rachel Alulis with design.

Before moving to Austin, Diana Small acted in the Lit Moon Theatre Company in Santa Barbara, CA. More recently, Diana returned to Santa Barbara last November to reprise her role of Queen Margaret in Henry VI Part 3. Heather Johnson is a full-time actor in Fort Collins and founded the city’s improv troupe, The Comedy Brewers. In Austin, Diana wrote and directed the play Suspicious Dinner at the 2013 Cohen New Works Festival presented by the University Co-Op, and she wrote Dream: A Midsummer Forrest Tour directed by Will Davis for the Zach Theatre’s balcony play series. Diana premiered the show Be Still and Know Nothing co-created with Patrick Shaw and Caleb Britton at UT’s Lab Theatre last December.