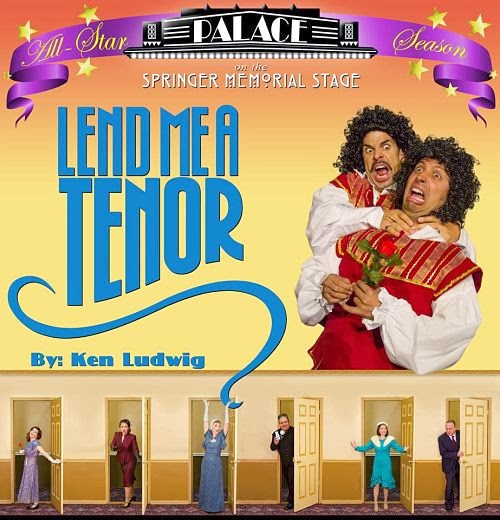 The All-Star comedy Lend Me A Tenor plays at the Historic Palace Theatre in Georgetown from January 10 to February 2, 2014 with Sarah May Jewell, Annie Violette, Nikki Bora, Wes Cheers, Marsha Kysor Sray, Joseph Burg David, Michael Dominguez, and Rick Smith. Written by Ken Ludwig, that master of the comedic stage play, Lend Me A Tenor was a big hit with Palace audiences when first performed in 2003 and then again as part of our 2007-2008 Season. For our All-Star Season 2013-2014, with a different cast and director, we proudly bring back this perennial favorite of play-goers everywhere! Be forewarned: You could ‘split your sides laughing’ at this, one of the funniest comedies ever written and performed!

Lannie Hilboldt, who was both the Director and Music Director for the Palace’s production of Always, Patsy Cline, directs this zany comedy about the world of opera gone awry! On a night in September of 1934—the biggest in the history of the Cleveland Grand Opera Company—world famous tenor Tito Merelli is to perform “Othello,” his greatest role, as a fundraiser for the Opera Company. Even before the star leaves his hotel room, everything begins to unravel. As mistaken identities and misinterpretations abound, chaos ensues. Through a hilarious series of mishaps, Tito is given a double dose of tranquilizers causing his assistant and the theatre manager to believe he is dead and setting off a chain reaction of slapstick and mistaken identity. Saunders, the company's General Manager, is determined the show must go on, so he enlists the aid of his assistant Max. What follows is a chain-reaction of confusion, plot twists, double entendres, innuendoes, and constant laughter.

The Palace seats about 295, with reserved seating paid for in the ticket price. The Palace office in the lobby of the theatre is open Monday through Friday from 10:00 a.m. until 4:00 p.m. (except for some holiday dates). Purchase tickets and select seating on-line at www.georgetownpalace.com or by calling (512) 869-7469 or (512) 869-5081. (Please call ahead regarding special needs seating.) Visa, Master Card, and Discover Card are accepted. The Historic Palace Theatre is located at 810 South Austin Avenue in downtown Georgetown and is part of the most beautiful Town Square in Texas!