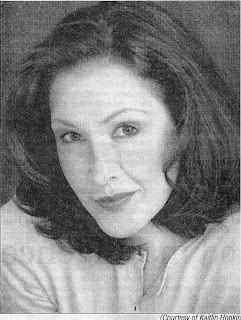 From the Texas State University Star:

Kaitlin Hopkins and her husband, James Price, have spent the last 25 years as nationally recognized performers, but they both knew their path would lead to teaching. That path has led them to San Marcos.

Hopkins begins as the new head of musical theater for Texas State in August. Hopkins will be involved in directing and overseeing student scholarships. Price and Hopkins will split teaching between seven different courses in the department, but their job begins this summer with recruiting students.

John Fleming, chair of the department of theater and dance, said Hopkins turned down a lead female role in the Broadway play, “Bye Bye Birdie,” to take the university position.

“We’re extremely excited. We already have a first-rate faculty, and they bring more visibility and connections,” Fleming said. “Professionals will come down and do things for our school for free.”

The couple has wanted to help a university better its theater department, and Texas State was a favorable environment for them.

“We have been looking for an opportunity to help build a program for a while now, and Texas State really seems like that program,” Price said in an e-mail. “After spending a few days on campus meeting with the faculty, the administration, the students — we knew this was the place for us.”

The award-winning Hopkins has a long list of acts on and off Broadway and in film, television and radio. Some of her Broadway roles were in “How the Grinch Stole Christmas,” “Anything Goes” and “Noises Off,” and her off-Broadway titles include “The Great American Trailer Park Musical” and “Johnny Pye and the Foolkiller.” She was recently on a national tour with “Dirty Dancing.”