Upcoming: The E-Word by Sharon Sparlin, Off Center, May 8-23 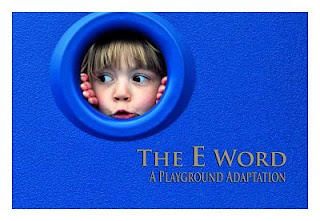 UPDATE: Review by Avimaan Syam in the Austin Chronicle, May 14

UPDATE: Elizabeth Cobbe's feature article in the Austin Chronicle, May 7: EVOLVING DIALOGUE - - Can Sharon Sparlin's play get science and religion to stop yelling and start talking?

The E-Word, A Playground Adaptation

A tender comedy with songs! Join a class of insatiably curious kindergarteners as they try to answer the big questions about science and religion. There’s make-believe mayhem as they become finches, tortoises, barnacles, beetles, Eve and Newton! We are along on the journey as the children struggle with the answers they find; the same struggles we still wrestle with as adults.
Not appropriate for children under 12.

On Wednesdays, local experts will mediate a post-show discussion.


This promises to be Austin’s premiere Darwinmania event—and national figures are paying attention!