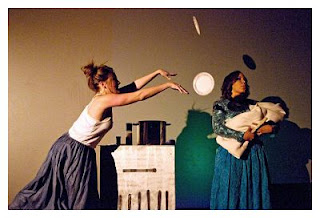 Emily Macrander made a visit two days ago to the rehearsals of Alice in Wonderland, opening tonight, April 9, at UT's Flawn Academic Center basement auditorium.

Alyssa Potasznik is directing the Foot in the Door liberal arts honors theatre group for her final project at UT. An excerpt from Macrander's piece:

Potasznik went into this production knowing it was an ambitious effort.

“This is the first show I’ve directed,” she said. “We’re taking on the biggest cast this company has had and the most technical work.”

Overall, the acting in Potasznik’s production surpassed my expectations. It showed the enthusiasm that I often see overlooked in professional productions. I can truly say that every actor on stage and every technician appeared to be having a good time, not just going through the motions. That’s saying a lot when it’s nearing midnight on the second-to-last rehearsal before the opening.

“I don’t care if it’s good or bad,” said Eric Camarillo, the play’s assistant director. “I’m having a blast, and I think everyone else is.”

(photo by Elizabeth Moskowitz for the Daily Texan)

Click to read the full article in the Daily Texan Online of April 9
Posted by Michael at 11:29 AM