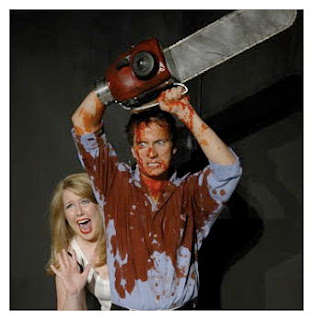 UPDATE: KOOP-FM's Lisa Scheps interviews Michael McKelvey and plays recorded music from Evil Dead, The Musical on her program "Off Stage and On The Air, October 5. Numbers presented:

Blood, Chainsaws, and Zombies: Not Your Average Musical

THERE WILL BE BLOOD. And it will be zombie blood. Salvage Vanguard Theater and Doctuh Mistuh Productions are teaming up to bring the slash hit, wait that’s, smash hit musical version of Sam Raimi’s “Evil Dead Trilogy” to Austin this October. Debuting in Toronto in 2003, the show has enjoyed successful runs worldwide in New York City, Seoul,Tokyo, Cleveland, and Louisville. The play combines the plots of all three movies with a few liberties taken here and there to keep it both streamlined for performance and fresh for fanatics.

[ . . . ] McKelvey has chosen David Gallagher for the part [of Ash], whom he calls, “the most versatile actor in Austin.”

One particular stand out from the auditions was Corley Pillsbury, who landed the part of Ash’s girlfriend, Cheryl. “Corley is a dynamo. We did a lot of improv work during auditions,” McKelvey explains, “and she just tore it up. I never saw someone go so over the top in an audition.” Her efforts became all the more impressive in retrospect when he learned that she was actually sick during auditions.

And if zealous acting and top notch musical direction is not enough to draw in the crowds, this show also has a live three piece band, late night parties with food and drink, and an beguilingly appropriate closing date of Halloween complete with yet another party. But most of all it has blood. As soon as the play was announced the first question on everyone’s lips was “will there be a splash zone.” And there will be. Right in front of the stage, a special cordoned area for those who want to take their interactive theater home with them… on their faces.

Evil Dead: The Musical runs October 9-31 at the Salvage Vanguard Theatre, 2803 Manor Rd. with performances at 7:30pm on Thursdays, Fridays, and Saturdays, and 5pm on Sundays.

Click for full text of interview by Brian Paul Scipione as published in INSITE magazine (1.8 MB - please be patient!)

Read more on Evil Dead, The Musical at AustinLiveTheatre.com, with link to KUT audio feature by Mike Lee