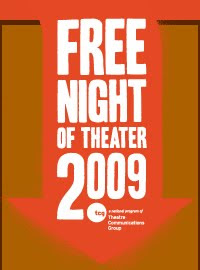 Under the national coordination of the Theatre Communications Group, some of Austin's theatres will once again this year offer free - - gratis -- no charge! tickets to their productions.

Last year 650 theatre companies in 120 cities across the nation gave away 65,000 admissions. So what's not to like? Sure, it's aimed at the couch potatoes of the world ("Maybe you've never been to the theatre, or you haven't been to the theatre in a long time. . . ."). The marketing assertion is that "loss-leader" freebies will build the potential audience, shifting the demand curve upward over the long run.

ALT assumes that since you're reading this, you're part of the existing demand curve. So, instead of stiffing a production you are planning to see anyhow, use the opportunity to see one that hadn't occurred to you.

Free Night of Theatre is aimed at Thursday, October 15, but in fact the tickets may be for performances during the second half of the month. You can't make reservations until 1:00 p.m. this coming Monday, October 12, and ticket numbers may well be limited. After the deadline, go shopping at the Free Night of Theatre 2009 list of productions, where you'll be limited to two free tickets.

As of now, the Austin region will be offering the following productions (free, yes, free!):

The Smothers Brothers with the Austin Symphony, Friday, October 23

Under the Gaslight, A totally original and Picturesque Drama of Life and Love in These Times, Austin Community College, Friday, October 30 and Saturday, October 31

And now a word from the organizers: