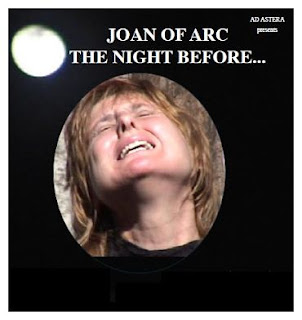 Joan of Arc, The Night Before . . .is a monologue in one act, written and interpreted by Daniela Paluselli and directed by Marno Enidos, about Joan's last night before she was burned at the stake.

The monologue gives voice to the Joan of Arc that is deep within every human being, the indomitable soul that is capable of believing to the point of accomplishing the impossible, and of dying for her belief in a supreme truth.

There are times when we all feel trapped, abandoned, alone, betrayed, dejected and scared of the future. Joan of Arc, The Night Before . . . portrays the journey of a soul from despair, fear and doubt, to faith, hope and courage through the appreciation of the miracle of life and the perception of an absolute truth that is indisputably real.

The production crew of Joan of Arc, The Night Before... made two trips from Hawai’i to France, traveling more than 30,000 miles to visit the places where Joan of Arc lived, fought and died. To capture a glimmer of her undying spirit, Daniela reverently retraced the steps of the great heroine. In Orleans she stood at the point where Joan crossed the Loire river with her armies. In Rouen, she touched the walls of the tower where Joan was held captive and then knelt at the site where Joan’s sublime courage met with her cruel executioners. Daniela incorporated the experiences of her journey into her interpretation of Joan of Arc, The Night Before...