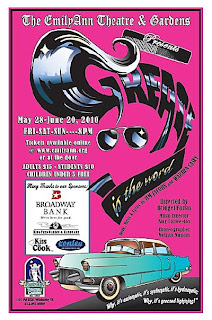 The EmilyAnn Theatre in Wimberley is not outside space and time, although from Austin you're going to take a leisurely 45-minute drive through the hill country to get there. And Wimberley may be in ranch land, but it's anything but rural. Witness the presence there of two lively and effective theatre organizations, the EmilyAnn with its outdoor amphitheatre and the Wimberley Players in their snug playhouse on Old Kyle Road.

Rather, it's Grease that stands outside space and time. The 1959 setting portrayed in the original 1971 production in Chicago has remained fixed in the national consciousness, through a lengthy Broadway run, a hugely successful 1978 film with John Travolta and Olivia Newton-John, and even the 1974-1984 TV series Happy Days that worked a similar scene with Henry Winkler as the "Fonz."

This is nostalgia for a high school experience that most of us never had -- the fictional leads Danny Zuko and Sandy Dumbrowski would be 67 years old today, senior to the Baby Boomers and yet too young to have been part of the Greatest Generation.

Grease works so well because it's an energetic distillation of adolescence, featuring the uncertainties, the swaggering, the exploration and the role play inevitable in any closely contained group of 14-to-18-year olds. The Good Girl and the good Bad Boy are just fated to get together, and we root for them all the way, hoping that they'll come to their senses. The music is familiar and fun, and the dances are the exuberant bursting-out that we secretly wish that we had been able to do at that age (or even now!).