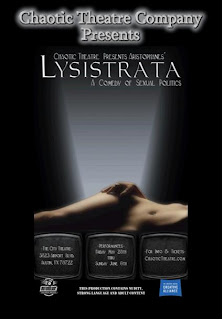 Lysistrata is a surprise in the compact canon of Greek drama. It's Aristophanes' clever satire of two usually unassociated aspects of manliness -- the male as warrior and the male as lover. Swordsmen in each case, although of quite different aspect.

There's a historical context of great seriousness to it involving wars between Greek city states in B.C. 413. That may partly explain why this text was awarded only third place in the theatrical competition that year. That background has dropped away in the 2500 years since that time, and Lysistrata stands -- erect -- on its own merciless mockery of the awkward aspects of human lust. Let's face it -- an aroused man is a bizarre sight, with his manly pride and attention concentrated in a yearning member, usually hidden. Nothing is more urgent for him that the business immediately at hand -- and if there were only some way to take him firmly near the short and curlies, one could lead him just about anywhere.

The Chaotic Theatre Company, established in 2009, has taken on familiar classics with the evident aim of giving them distinctive interpretations. Their Alice! was a psychotic adventure in the wonderland of an institute for the insane and their Midsummer Night's Dream was an effective although unadorned version of that familiar Shakespeare text, assisted by a guitar band.

Their Lysistrata is an intriguing two-speed interpretation. The thesis -- never really exploited or completely explained -- is that the events we are witnessing take place in some undefined future time. The company combines an anonymous but intact translation of Aristophanes' mocking, often ribald text with monologue commentaries delivered by individual actors. Jenny Lavery, Aja McMillan, Elexia Lowe and Donovan McCallum reflect on our culture's commercialisation of sexual themes, speak of uneasy feelings about sexual self images and seek to define manliness and womanliness. This additional material is credited in the program to them and to director Michael Floyd, whose program notes evoke the same themes.