American Volunteers by Johnny Meyer, Staged Reading at University of Texas, May 24 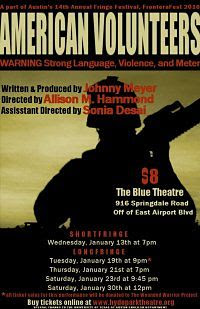 The hero's aura that trails after the 27-year-old John Meyer looks to be authentic. The man was an Army ranger -- no small accomplishment. Only the toughest and most apt--men only--finish the 60-day training course at Ft. Benning, in the Georgia mountains and in the Florida swamps. They are in constant physical training and in simulated combat operations, often functioning 20 hours a day. The lore is that the stresses age these men prematurely. Candidates commonly lose weight -- between 20 and 40 pounds from already fit bodies. Leadership at the platoon level is a foremost criterion of selection -- and evaluation is both by the trainers and by peers in the squad.

Meyer has been there. He's done that. He served as a ranger in Afghanistan, an experience that provided him with the material for an unpublished novel. He was called back for service under the terms of his Army reserve status, in 2006 while studying at UT for his undergraduate degree. His concept of the novel changed. He says that he had an agent for a brief period -- until he told the agent that he was recasting about half of the text in verse. Meyer attended Shakespeare in Winedale, a formative experience, and last week after the staged reading of American Volunteers for the UT English Department he spoke earnestly about the immediacy of theatre. "You can close a novel and put it down. You can't do that with theatre."

American Volunteers has the feeling of authenticity in the details -- the guy talk, the stress, the confusion of war, and the yearning for home. I just wish it were a better play.