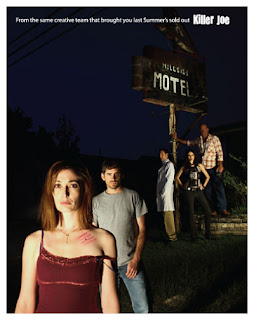 Tracy Letts is hard to take. Any playwright is something of a god, sitting before that first blank page with the power to create and mold character and situation. Letts gives us the polarization of that Genesis -- evidently fascinated by the dark and the desperate, he crafts characters beaten down by one another, trapped in poverty, deprived of education and understanding, aching for meaning. He endows them with life, vivid relations and back stories

His Killer Joe, done here last year by essentially the same company of actors, was a powerful but despicable work resembling a vicious dogfight among human beings. 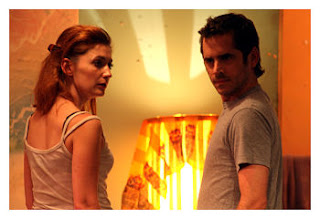 Bug is a different voyage from roughly the same origins. Director Mark Pickell and the cast set the rhythms, the characters, the relationships in the first half as if they were knowledgeable deepsea anglers hooking the great fish of the audience. In the second half they play us with determined cruelty and we have no choice but to follow. Bug reveals itself in Act II to be a trip into paranoia, fantasy and psychosis.